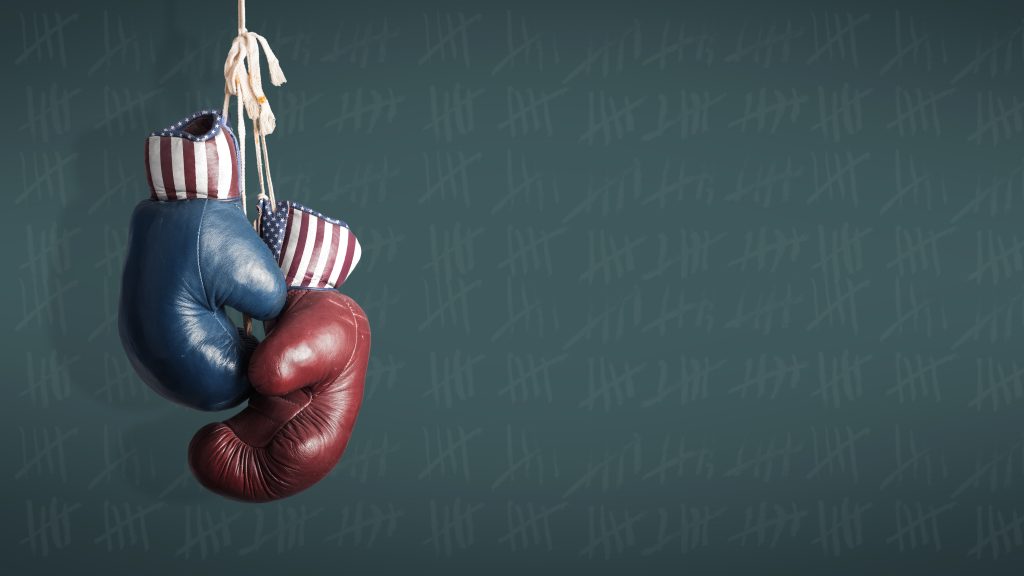 It was the winter of 1991, and two of my neighborhood buddies – Johnny B. and Danny F. – each nearly lost several fingers because of two mind-numbing accidents that occurred in consecutive weeks. In the case of Johnny B, he was the victim of a temperamental food processor jammed with some tantalizing cheddar cheese. For Danny F, he was betrayed by a seemingly-clogged snow blower. Well, there must be something in the water from my bucolic, small town in western New Jersey because I am about to willingly stick my hand in the proverbial blender by covering two contentious topics in this letter – politics and the November election.

In one of our frequent group discussions, I recently asked Destiny Capital’s wealth strategists and financial planners what questions and concerns they are hearing from their clients most often these days. To my surprise, the answer wasn’t COVID – it was concern about the November election. Therefore, it was suggested that someone publicly articulate our firm’s general thoughts on this subject – and all digital eyes turned to me despite my best efforts to slink below my desk and out of eyeshot of my Zoom webcam.

Clearly, we aren’t going to touch-on who can, should, and will win in November. We aren’t going to predict causality either, making proclamations like “if Biden wins, X will happen” or “if Trump wins, Y will happen.” We are, however, going to review the relationship between politics and financial markets, which should help you understand whether or not –or to what extent – we allow politics to influence our investment strategies.

To start, I’d like for you to read the following four sentences, imagining each is true as you read it:

– All ballots have been cast and counted, and Donald Trump has won a second term as President of the United States of America in a historic, landslide victory.

– All ballots have been cast and counted, and Joe Biden will be the 46th President of the United States of America after a historic, landslide victory.

– Finding a loophole in Senate regulations, Mitch McConnell has granted himself a lifetime appointment as Senate Majority Leader.

– Finding a loophole in Congressional regulations, Nancy Pelosi has granted herself a lifetime appointment as Speaker of the House.

I don’t mean to be flippant with those last two sentences, but I’d imagine that some of you had a visceral, emotional or even physiological reaction to reading one – or many – of those sentences. That’s the nature of politics these days – just check your Facebook news feed. We all have very strong opinions and feelings – and rightfully so – about both the direction of our country and our elected leaders. However, if we were to make investment decisions based solely on an election outcome, we’d immediately be breaking two of the five core investing principles we adhere to at Destiny Capital:

Disciplined:  we do not chase returns or seek to time the market.  We adhere to our process, thesis and values, even throughout the most difficult of times.

Data-Driven:  decisions are based on objective data, not subjective emotion or ‘gut feelings’.  Decisions based on emotion tend to lead to negative outcomes.

When it comes to an election, we run the risk of making investment decisions by predicting an unknown, event-driven outcome. This gets dangerously close to timing the markets. Let’s also say that your prediction of the event is correct (Trump wins / Biden wins), then you also have to be right that your causal interpretation of the outcome (eg Biden wins so X will happen. Trump wins so Y will happen) will be correct.

I’ll give you an example – it was the year 2011, and investors were still in traction after the beating they had taken during the Great Recession of 2008. Congress could not agree on terms to raise the national debt, resulting in the U.S. Debt Ceiling Crisis of 2011. This ultimately influenced Standard and Poor’s decision to downgrade U.S. debt from AAA to AA+. Many economists, investors, and analysts were convinced that the debt ceiling event, coupled with an S&P downgrade, would irreparably harm financial markets. These economists, investors and analysts were right – for a few months. Markets sold off sharply in July and August of 2011, only to recover almost entirely by January of 2012. Many economists and investors were absolutely convinced that the Standard and Poor’s downgrade would result in a long-term catastrophe, yet – to paraphrase Jeff Goldblum’s character in Jurassic Park – “markets find a way.”

Furthermore, we recognize that our firm is made up of human beings of differing backgrounds, beliefs, upbringings, educations, and – yes – even political affiliations. As you can see in the chart below, opinions about the health of the economy can vary greatly based on political affiliation and who is sitting in the oval office. This chart illustrates the percentages of Republicans (red line) and Democrats (blue line) who rated national economic conditions as good or excellent and – as you might expect – the outlook primarily falls on party lines. Republicans were more optimistic when George Bush was President, then – after the Great Recession when everyone was despondent – Democrats became more confident when President Obama was in office. Finally, Republicans grew more optimistic about the domestic economy when Donald Trump became President in 2016. Now, in 2020, everyone is despondent once again thanks to COVID-19. Making decisions based on political elections and their outcomes can allow for emotion to enter the decision-making process, and that violates our core principle that investment decisions aren’t based on ‘gut feelings’.

As always, when confronted with investment decisions that may be influenced by event-driven outcomes, we fall back on a familiar refrain – what do the numbers tell us?

When it comes to presidential cycles – historically speaking – we see lower returns of a composite S&P 500 / DJIA index in the first year of a President’s term, regardless of party, then increasing returns in each subsequent year. This is illustrated in red on the left side of the chart below. You could surmise that markets are a little unsure about the new administration’s platform and priorities until, over time, we once again hear Jeff Goldblum whispering “markets find a way.” The chart above also illustrates that performance may vary significantly over the short-term. This is most evident in the 2-year (dark blue bars) returns of a Republican sweep (+12.2%) vs. Democrat sweep (+3.4%) and a Republican President with divided Congress (+1.1%) vs. a Democratic President with divided Congress (+14.5%).  Yet, over the entirety of a 4-year term (light blue bars), we see very little difference in the performance of the underlying composite index, with Republican Presidents at +8.6% and Democratic Presidents at +8.8%. As long term investors who do not attempt to time the markets, we would tend to be better served by providing financial markets with some time to navigate a new President’s agenda rather than predicting a causal relationship. Could we see a reactionary, short-term market selloff immediately after the election? Sure we could. However, as we saw in the 2011 Debt Ceiling Crisis, financial markets can be quite resilient in absorbing change and rebounding from short-term shocks.

Having said all that, it’s also important to know that Destiny Capital’s core investing principle ‘Disciplined’ does not equate to ‘Stubborn’. Our team maintains a keen eye on the global & domestic economy, current market conditions, new rules & regulations, and so forth. If we identify an issue that alters our long-term outlook, we will not hesitate to make a change to our recommended portfolio allocations. It’s also imperative to understand that, at Destiny Capital, we take a comprehensive approach to protecting and advancing our client’s assets. This means that we address changes that may impact our long-term outlook through both investing and comprehensive financial planning.

For example, if it is clear that U.S. citizens are going to see a tax increase to areas like income, capital gains, and dividends (to be clear – we are not predicting this), then we will not only address these changes through investment strategy, but through comprehensive financial planning. Destiny Capital’s team of Certified Financial Planner (CFP®) professionals literally get giddy – believe me, I’ve seen it – when they identify opportunities to add value through elevated tax, estate, insurance, investment, and retirement planning. This is what we do, and what we do well.

There are just under 100 days until the November elections. By all accounts, this is going to be a contentious – and exhausting – few months of debates, political ads, and conversations among family and friends. If you have continued concerns about the election in November, we encourage you to reach out to your Wealth Strategist, Planner and/or Coordinator as a resource. Between the COVID pandemic and political environment, we understand how emotional and stressful this time may be for many of you. At Destiny Capital, two of our firm’s core values are Respect and Empathy. As a team, we have open and honest dialogue about what these values mean and how we can best reflect them within our team, with our partners, and with our clients. We do not judge, and we do our best to see life through your eyes given your experiences and your background. If you are concerned about a particular hypothetical outcome, we can tell you how that concern may be remedied through investing and/or innovative planning strategies. Again, this is what we do.

As always, please do not hesitate to reach out to our team if there is anything you need, and please stay safe and stay well.