My wife has always been an anxious flyer. For her, nerves don’t necessarily come from the flight itself but from all that happens upon her arrival at the airport to when the nose of the plane lifts into the sky. It is the anticipation of the flight that causes her anxiety. After all, as Tom Petty once wrote, “The waiting is the hardest part.”

Many years ago, in the early stages of our relationship, our flights together were much like the classic 1980’s movie Say Anything and its memorable “just wait for the ding” ending sequence. For those of you who are not familiar with this film, John Cusack’s character Lloyd and his girlfriend Diane are on their first flight together. Diane is absolutely petrified of flying, so Lloyd (who exhibits some jitters himself) holds her hand and constantly reassures her that every rumble, clank and jolt during taxi and takeoff is perfectly normal. He then further attempts to comfort her by insisting that everything will be perfectly safe once the captain turns off the No Smoking sign (remember those days?). “Just wait for the ding,” Lloyd says, as they eagerly stare at the illuminated symbol overhead until the movie suddenly ends with a ding.

This scene did a wonderful job of generating relatable feelings of tension and anticipation. Now, here we all are at the end of Q1 2021, and I think we are all feeling a similar nervous angst and eager anticipation as we wait for a signal that will tell us that the COVID-19 nightmare is over and that all will be well.

Over the past year, we have written at length about building a bridge from pandemic to recovery. One thing for certain is that we have made tremendous progress. Failing any unexpected twists, the bridge is nearly complete, but we’re not quite finished. In this letter, we will provide a quick COVID-19 update, resources for vaccine hunters and a preview into what comes next, including a summary of the Biden administration’s new infrastructure proposal entitled “The American Jobs Plan”.

Roughly a year ago on April 1, 2020, there were a total of 883,000 confirmed cases of COVID-19 and 44,000 fatalities worldwide. As of April 1, 2021, there have been 129 million confirmed cases of COVID-19  and 2.8 million fatalities across the globe. It is hard to mentally unpack all that we have dealt with over the past year, and it is likely that we will all continue to experience the ripples of this pandemic in different ways throughout the rest of our lives.

The encouraging news is that the United States has made significant progress throughout Q1 of 2021 in getting the approved COVID-19 vaccines (Pfizer, Moderna and Johnson & Johnson) into the arms of Americans. By January 2nd, 4.2 million Americans had received at least 1 vaccine dose, and zero citizens were fully vaccinated. Fast forward to April 1st, and 99.5 million citizens have received at least one dose. 56 million citizens have been fully vaccinated.

One other thing that has become clear as the COVID-19 vaccine rollout continues is that more needs to be done and that vaccine envy is a very real thing. While 99 million citizens is a large number, it only represents 30.33% of the United States’ population, and many still eagerly await eligibility for or availability of vaccination appointments.

As of Friday, April 2nd, all Colorado citizens ages 16 and older are now eligible to receive the COVID vaccine without any qualifying conditions. Vaccine demand will likely increase in the coming days and weeks, so we thought it might be helpful to provide some resources that many on the Destiny Capital team have found helpful in locating vaccine appointments personally and for our families. Note: please click on the bold, underlined header to follow each link.

Colorado COVID-19 Vaccine Spotter: This is a tool that helps you find appointment openings at a variety of Colorado pharmacies. While this link takes you directly to the Colorado site, Vaccine Spotter is available and effective throughout many states at http://www.vaccinespotter.org.

Facebook Group – Colorado Vaccine Hunters:  If you are a Facebook user, you may join the Colorado Vaccine Hunter group, which provides tips and tricks for finding and scheduling local appointments and obscure local vaccine drives that aren’t widely publicized. As always, please be careful when it comes to sharing any personal information in a public forum.

For health providers like Kaiser, SCL Health, UC Health and Centura Health, you do NOT need to be a member of their health network to receive a free COVID-19 vaccine, but you must sign up for their health portal(s) in order to become eligible for an appointment.

As illustrated in the chart below, confirmed cases and fatalities have decreased dramatically since January and February as the vaccine rollout ramps up, but we are seeing a leveling-off in recent days, indicating that we are not quite out of the woods yet and that risks remain. 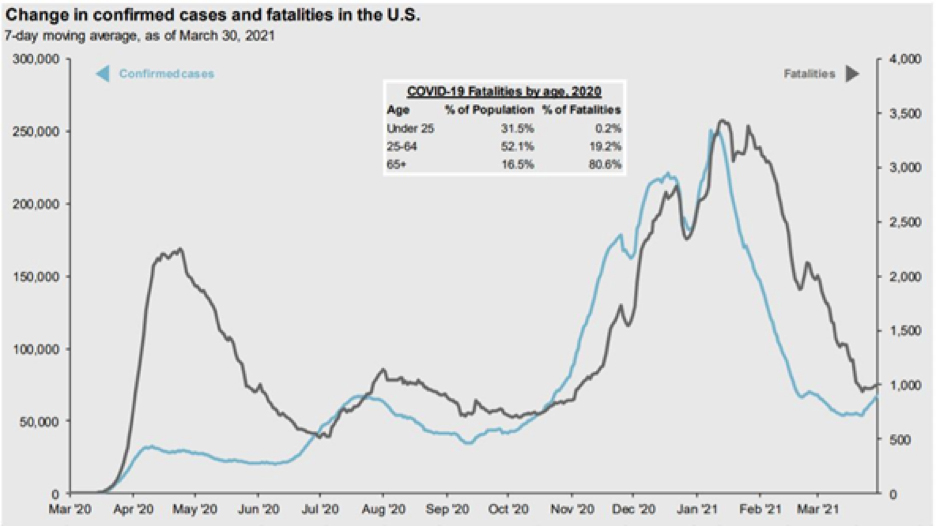 While there may never be a true end to the COVID-19 pandemic, the hope is that it will be manageable enough for our lives to resume some semblance of normalcy and for our daily focus to shift to other key items. This is exactly what the Biden Administration is beginning to do with the infrastructure plan that was introduced on March 31st, which we will review next.

It seems like every few months we find ourselves talking about a new multi-trillion dollar fiscal stimulus agenda, but this is the first lately to address something not entirely related to the COVID-19 pandemic. According to a 2019 report by the World Economic Forum, the United States ranked 13th in the world in overall infrastructure behind countries like France, Germany, the United Kingdom, Singapore, Japan and others.

The American Jobs Plan is a $2 trillion dollar fiscal stimulus agenda that proposes to improve American infrastructure in ways that go beyond basic roads and bridges. Some of the general proposals from the plan include:

Clearly, that is an ambitious and costly agenda that will receive plenty of scrutiny from both sides of the aisle, particularly when it comes to funding. The Biden administration proposes to fund their agenda in part by raising the corporate tax rate from 21% to 28%. While this represents a significant increase, it still falls below the 35% tax rate that existed prior to the Tax Cut and Jobs Act of 2017.

Republicans are expected to balk at any proposal that would raise taxes of any kind, so Democrats have floated the idea of approving the American Jobs Plan with a budget reconciliation bill which bypasses the 60-vote threshold of the Senate filibuster and can pass on a simple majority vote.

It is far too early to predict causality as it relates to the American Jobs Plan. There are simply too many unknowns at this point, so we will close this month’s letter with a high-level overview of some recent developments that might interest investors as we move into Q2 and beyond.

The United States economy is prepping for a surge, and we hope it is one of economic activity and not of COVID-19 cases. As more and more people receive a COVID-19 vaccine, we expect to see a continued climb in Travel and Navigation App Usage, TSA Traveler Traffic, United States Seated Diners and Hotel Occupancy. Given this increase in activity since the beginning of 2021, as illustrated below, perhaps it should not come as much of a surprise that the United States is now exceeding expectations in one important area – job creation. 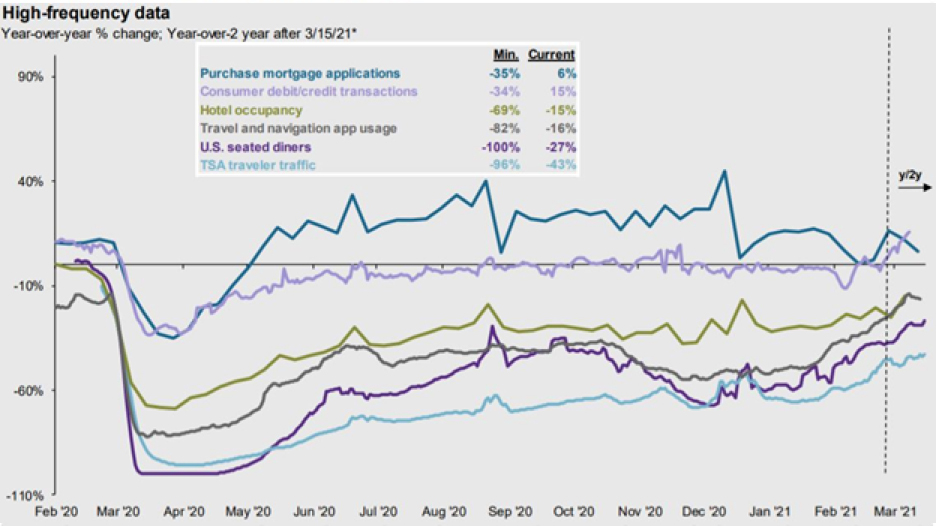 The Bureau of Labor Statistics released its March jobs report on April 2nd, showing that the United States added over 916,000 non-farm payroll jobs during the month, which was far above the 660,000 that was estimated. In further good news, the Department of Labor’s reports from January and February were upwardly revised from 166,000 to 233,000 in January, and from 379,000 to 468,000 in February. As of this writing, the unemployment rate stands at 6%.

If you turn on any financial news network in the next few months, you will likely hear about the threat of rising inflation mentioned by various pundits across the dial. By most textbook definitions, inflation is a byproduct of supply and demand. The fear is that with this flood of fiscal stimulus and loose monetary policy, inflation must be soon to follow. The same fears existed in the years after the great financial crisis as fiscal stimulus and accommodative monetary policy kept markets afloat. As the economy rebounded after 2008, that broad inflation never quite materialized.

As the first round of stimulus checks went out in 2020, we began to hear chatter of inflation once again.  However, a strange thing happened when these checks were received by many Americans. Instead of buying apples, many bought Apple stock. We saw a significant surge in retail trading activity over the past year that aided the broad market rebound we have experienced since mid-March of 2020. It will be interesting to see whether or not this most recent round of stimulus checks finds its way into the economy or into retail trading accounts.

What do we know when it comes to inflation? Well, we know that the Federal Reserve uses Core Personal Consumption Expenditures (PCE) as its inflation indicator, and it generally has a PCE target of 2%. As you can see in the chart below, Core PCE remains well below target levels and historical averages as of February, 2021. We see targeted inflation in many places (just ask a home buyer in Colorado or a college student, anywhere). However, we haven’t seen the type of broad-based inflation that will cause concern for the Federal Reserve or for investors.

As Federal Reserve Chairman Jerome Powell said in March, “We expect that as the economy reopens and hopefully picks up, we will see inflation move up through base effects. That could create some upward pressure on prices.” Even so, he does not expect this upward pressure to be long-lasting or extensive enough that the Federal Reserve would change its current accommodative policies.