As I compose this month’s Market and Economy Update, I grow anxious looking at the calendar to see that we are fast approaching a pivotal event that has the potential to shape the course of the future. No, this important event isn’t a Federal Open Market Committee meeting or the G12 Summit. I’m talking about the 2021 National Football League (NFL) draft.

The NFL draft is a bit of a wonky obsession for many football fans across the country, myself included. It exists at the nexus of three of America’s favorite past times: college football, the NFL and reality television. The draft presents a tantalizing combination of sports, statistics and personal intrigue which makes it so alluring to many and so irritating to others (i.e., my wife).

Granted, as a Chief Information Officer and father of two small children, I don’t quite have the time to devote to the draft as I did in my early twenties when I would sit in a basement with a few friends all day, drink a few cold ones and eat Sloppy Joe’s (the East Coast style sandwich with rye bread, cold cuts and coleslaw – not the Manwich version).

However, if you have read any of my previous content, you will know that in my mind at least, just about everything relates to investing in some way, shape or form. So, this weekend, as I perused one of 23,457 mock drafts published over the past month, I could not help but think of parallels between the NFL draft and portfolio management.

Constructing investment portfolio is a lot like an NFL general manager assembling and managing a football team. Due to a salary cap, an NFL general manager has finite capital and needs to invest in players and positions that will provide the best return on investment and win the most games. It is no accident that NFL pundits proclaim that a player’s “stock is rising or falling” as the draft grows near. Similar to a portfolio manager, a general manager’s work never ends, as circumstances and performance may warrant eventual roster changes.

The past 12 months have been filled with a lot of stress, angst and anxiety. Therefore, I thought I would offer some levity in this month’s update by drawing some parallels between football players, positions and key asset classes that Destiny Capital uses for portfolio construction. In doing so, I will reference one of my favorite high-level charts that we review frequently – the 15-year asset class performance chart, as detailed below.

To start, we will look at the most important position in football – the quarterback. 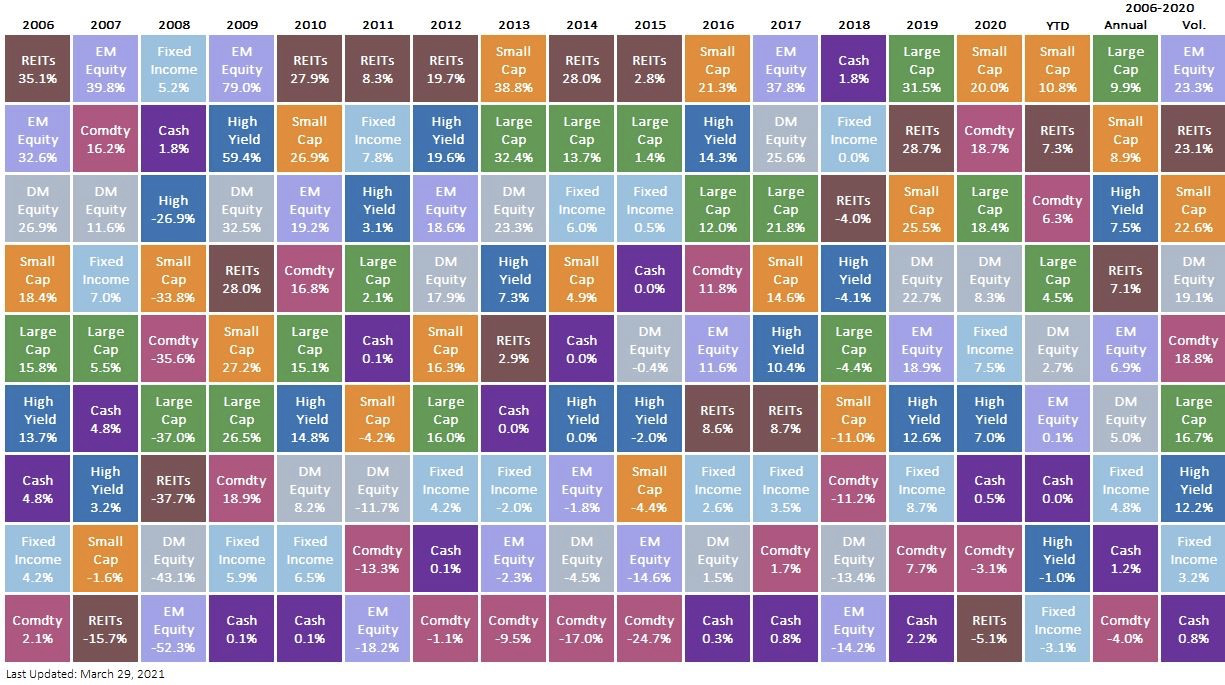 In my opinion, the NFL quarterback is the most important position in all of sports. The position is so crucial that having a good, bad or serviceable quarterback often dictates the success or failure of each team in every football season. For investors, large-cap stocks are equally important, and we view them as a foundational piece of any diversified portfolio. A large-cap stock is generally defined as a company with a market cap (share price multiplied by shares outstanding) over $10 billion. Fifteen to twenty years ago, when outlining some of the most well known large-cap stocks, I might have listed companies like Coca-Cola or Proctor & Gamble. These days, technology and communication services companies like Amazon, Apple, Microsoft, Google and Facebook tend to dominate this space.

In the chart above, you will see that large-caps have the best annualized performance of all asset classes since 2006. Therefore, much like a top-flight quarterback, investors are often willing to overpay for large-cap stocks. This is evident when looking at valuation metrics like the Forward P/E ratio for the Technology sector, where the current Forward P/E for Tech is 27.5x vs. a 25-year average of 18.8x.

While other more volatile asset classes may outperform large-caps in any particular year, we still expect large-caps to warrant significant investment over the long-term. This is why we tend to overweight large-caps relative to most other asset classes when constructing client portfolios. Much like the New England Patriots drafting a quarterback like Tom Brady in the year 2000, large-caps have shown tremendous resiliency and success over an extended period of time, and we don’t see that trend changing any time in the near future.

Generally speaking, the ‘X’ receiver in football tends to be a team’s game-breaker – the guy who can explode for a touchdown at any time and lead his team to victory. However, there may be times when the X receiver is “invisible” for a few games, putting up pedestrian numbers and causing general frustration among a team’s fan base. We see similar characteristics in emerging market equities. When emerging market equities pop, they really pop. At other times, they may not perform up to expectations, given their potential.

The NFL has been a pass-happy league for the past several years, and we’ve seen an explosion in offensive output, thus making the X receiver a key weapon. Similarly, we see an economic environment that could provide some tailwinds to emerging market equities. Many economists expect to see an increasing weakness in the dollar, which tends to be a boon to both emerging market and international equities. We have seen a decline already in recent months, as illustrated in the chart below, and while currency movements are extremely difficult to predict, a weakening in the U.S. dollar is expected to continue over the next several years. 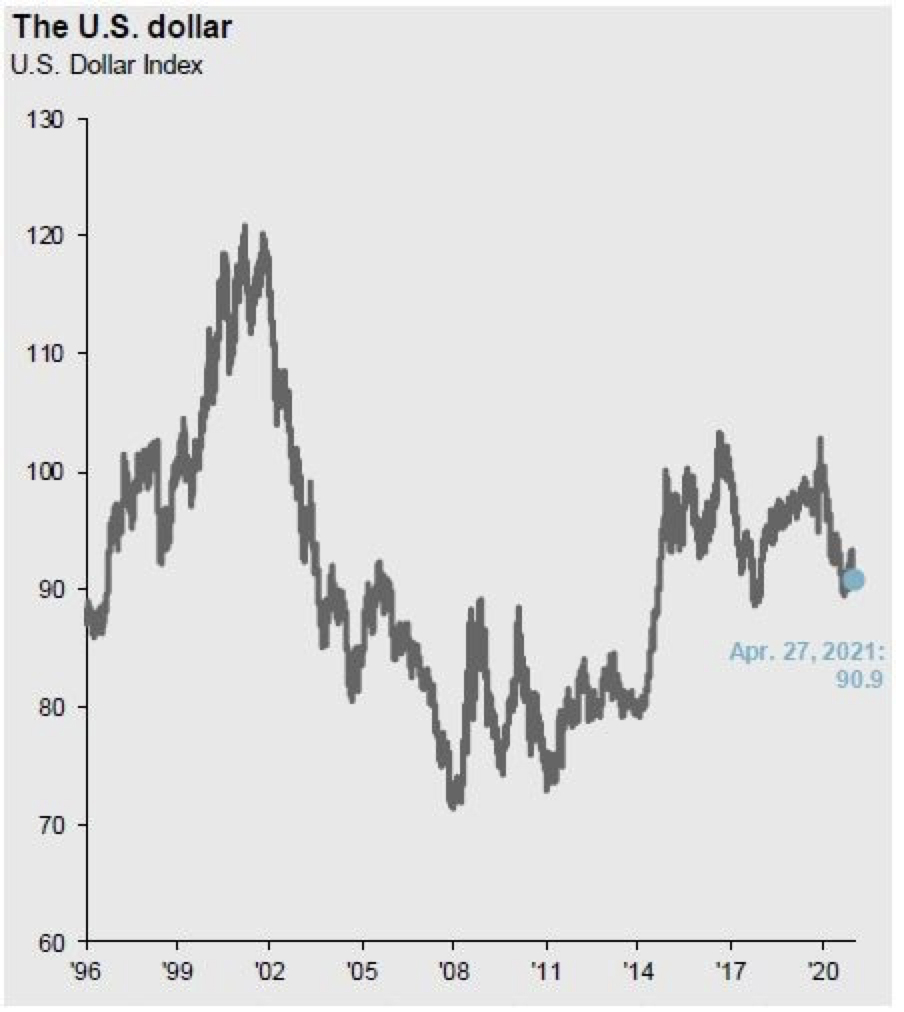 We also expect to see a rise in the middle class in emerging market countries over the next 10 years, which has the potential to spur growth for companies in these regions. This is evident in the chart below, which illustrates projected growth of the middle class as a percent of total population in key emerging economies. 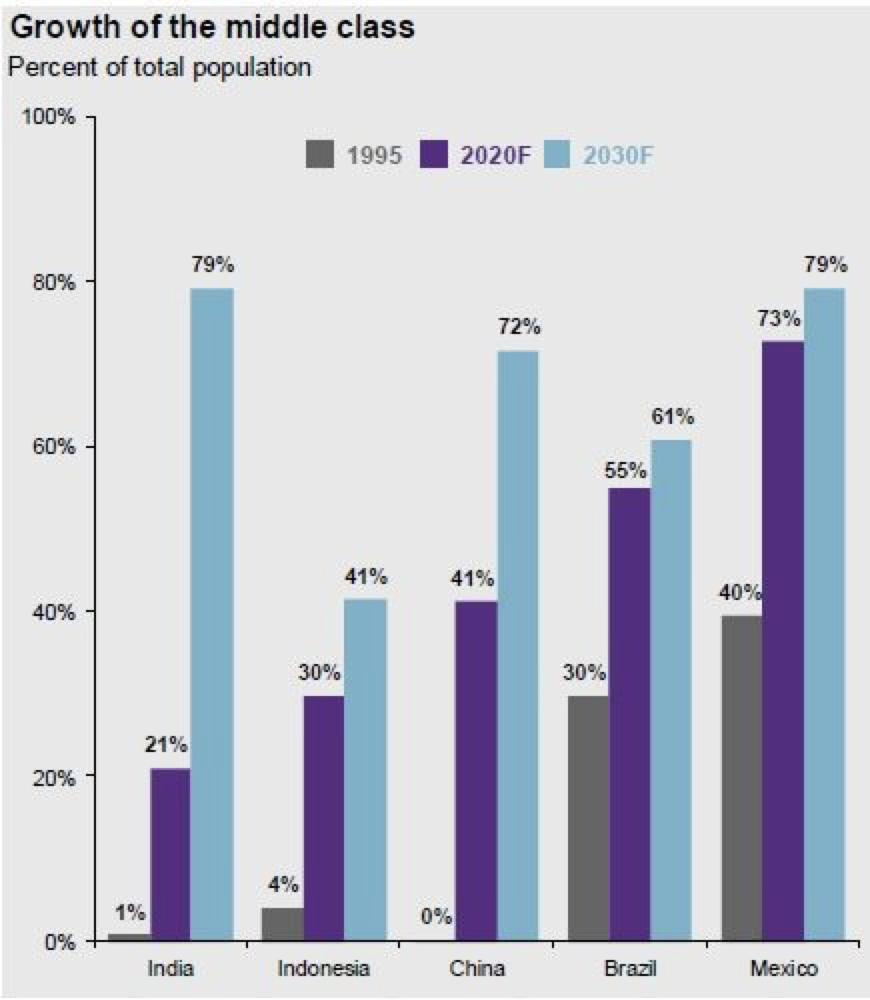 Clearly, these regions are subject to greater volatility. The significant spread of COVID-19 in India and its economic impact is just a recent example of this.  However, we believe emerging market equities are an important component of a diversified portfolio and will be a key asset class in generating investment returns in the coming years.

However, when it comes to football, the center not only protects the ever-important quarterback. He also plays a key role in calling out protections to the rest of the offensive line and anticipating how the defense is going to attack the offense. For many analysts and economists, yields on various U.S. treasuries (1yr, 3yr, 5yr, 10yr, 30yr – or the yield curve) serve as an important economic indicator. The slope of the yield curve (normal/flat/inverted) may indicate anything from, “All is well,” to “Recession is nigh.” Clearly, in this interest rate environment, U.S. Treasuries are not going to score many offensive points for investors, but they offer an important equity hedge for investors whose personal risk tolerance and/or financial goals cannot withstand the general volatility experienced in equity markets.

By investigating the parallels between football and investing, one thing is clear: I need to be much kinder to the general manager of my beloved Philadelphia Eagles. Much like a portfolio manager, a general manager’s job is not easy. At Destiny Capital, our decisions are not based on emotion. They are disciplined and data-driven. We base our investment allocations on the best research, information and analysis we have at hand. However, much like with sports, this is an uncertain world, and circumstances can change quickly (i.e., the global pandemic), presenting both challenges and opportunities.

Speaking of the global pandemic, this will be the first monthly letter in over a year that does not include an update specific to COVID-19. This does not mean that COVID-19 is not still top-of-mind and of paramount concern for investors.  However, much like we have hoped for over a year, we are seeing vaccines administered, restrictions lifted and life returning to some semblance of pre-pandemic normal.

In fact, it gives me great pleasure to announce that at Destiny Capital we plan on returning to business as usual in the coming months. Our team has been fully remote since March of 2020, and we plan to return to our Denver West headquarters on July 5, 2021. We realize that remote annual-planning reviews are a real convenience for many clients, but some prefer in-person meetings. After July 5, we hope to accommodate either preference as we schedule client meetings. Clearly, this is a fluid situation and complications could emerge, but we are heartened by the progress being made in the U.S., and we are excited to reconnect in-person with our team, our clients and our partners.