We are a society that has come to expect immediate gratification, so spending hours – let alone days – refreshing the vote count in states like Nevada, Arizona, Pennsylvania, Georgia, and North Carolina was painful and frustrating.  Our long wait finally came to an end on Saturday morning when major media outlets across the country called the election, declaring that Joe Biden would be the 46th President of the United States.

There’s no denying the fact that this was a contentious and emotional election for an increasingly divided country.  In fact, some reading this communication may feel that this election outcome is still far from certain, and it is clear that Donald Trump will continue to exercise all legal avenues available to challenge the result.  Furthermore, the outcome in the Senate has not been decided yet, as some races remain too close to call, and two Senate seats in Georgia will go to a runoff election in January.

Our job isn’t to declare winners and losers – it is to study the most likely outcome given new, relevant data and to understand how financial markets may react.  At this stage, it appears as though financial markets are betting-on an outcome of divided-government, meaning that Joe Biden will remain the President-Elect, Republicans will keep the majority in the Senate, and the Democrats will maintain the House after losing a number of seats.

This likely outcome of divided government provides some clarity around key topics that we will attempt to address below, and we’ll begin with the COVID-19 pandemic.

Clearly, the pandemic remains the most significant cause of uncertainty in financial markets, and recent developments provide a mixed bag of news. In the United States, daily confirmed new cases have recently exceeded 100,000 as seen in Chart A below, and there’s no reason to believe that this trend will reverse itself in the near future. 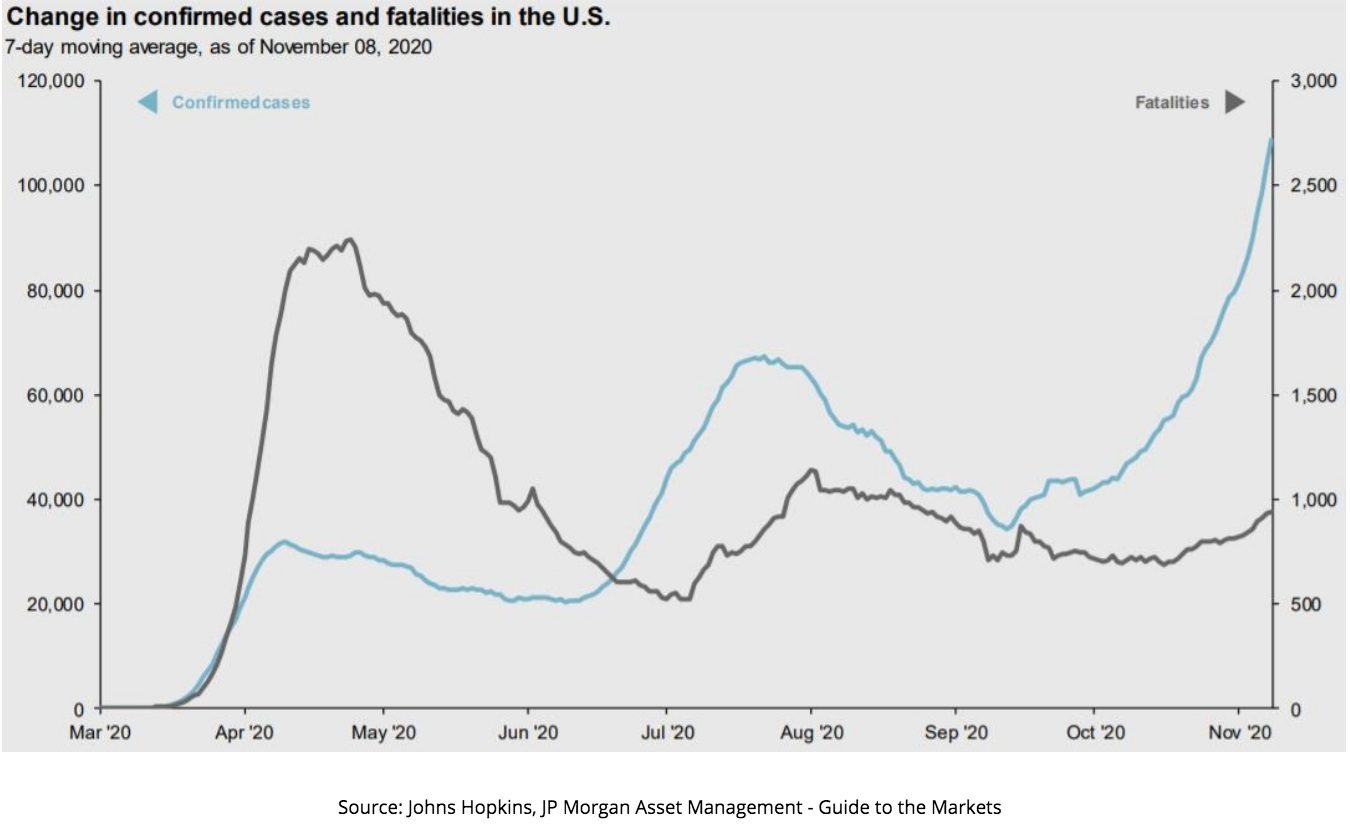 President-Elect, Joe Biden, has stated that the pandemic is his administration’s number one priority, and he is assembling an Advisory Board to address COVID-19 at a national level.  However, there remains quite a bit of time between now and his potential inauguration on January 20th.  In the meantime, the Trump administration has called on state and local governments to address the pandemic at the state level, so we will continue to see states and localities handle the pandemic in ways they deem most effective.

Regardless, we expect industries such as air travel, restaurants & bars, hospitality, etc. to continue to disproportionately suffer relative to other industries.  As we’ve stated in previous communications, economic recovery from the pandemic isn’t about what people can do, it’s about what people will do while the risk of contracting COVID-19 remains.

In some welcome, positive news – as of this writing on November 9th – we’ve received an update that Pfizer and their German partner BioNTech have tested a vaccine that has reportedly been 90% effective in trials.   Pfizer CEO Albert Bourla called this Covid-19 vaccine “the greatest medical advance in the world’s last hundred years”, and markets have responded favorably to this news.  If trials continue to move in a positive direction, Pfizer expects to have up to 50 million vaccine doses available by the end of 2020, with over 1 billion doses available in 2021.

This is the most significant, positive news we’ve received since the onset of the COVID-19 pandemic, and will likely have a significant impact on our next topic – fiscal stimulus.

We believe there will be additional fiscal stimulus passed in order to help bridge the gap between the COVID-19 pandemic and a widely distributed and effective vaccine.  Clearly, the recent Pfizer/BioNTech announcement makes this situation much more fluid than it was just a few days ago.

Prior to the election, Senate Majority Leader, Mitch McConnell, stated that he was open to discussing additional stimulus after the election.  Over the past several months, Democrats have been pushing for a larger stimulus package of around $2.2 trillion.  In July, Republicans put forth a $1 trillion stimulus package that never came to a vote. With the likelihood of divided government and the recent Pfizer/BioNTech announcement, it is likely that additional stimulus will be passed, but it will be a bit more muted than what we might expect if there had been a Democratic sweep. This puts some of the focus back on the Federal Reserve, which touches on our next topic – The Fed & Interest Rates.

In his remarks on November 5th, Fed Chairman, Jerome Powell, asserted the need for additional fiscal stimulus from Congress. He praised the efficacy of the CARES Act in supporting the economic recovery we’ve experienced thus far, but said that more is needed beyond Fed monetary policy in order to bridge the gap between now and a widely distributed and effective COVID-19 vaccine.

In the meantime, the Fed will continue to increase its holdings of Treasury securities and agency mortgage-backed securities at least at its current pace.  This is intended to sustain smooth market functioning and – through this accommodative approach – should support the flow of credit to households and businesses.  As far as interest rates are concerned, we expect the Fed to maintain its fed funds target rate of 0% – .25% throughout the remainder of 2020, and throughout all of 2021, at the very least, as seen in the funds rate expectations detailed in Chart B below. 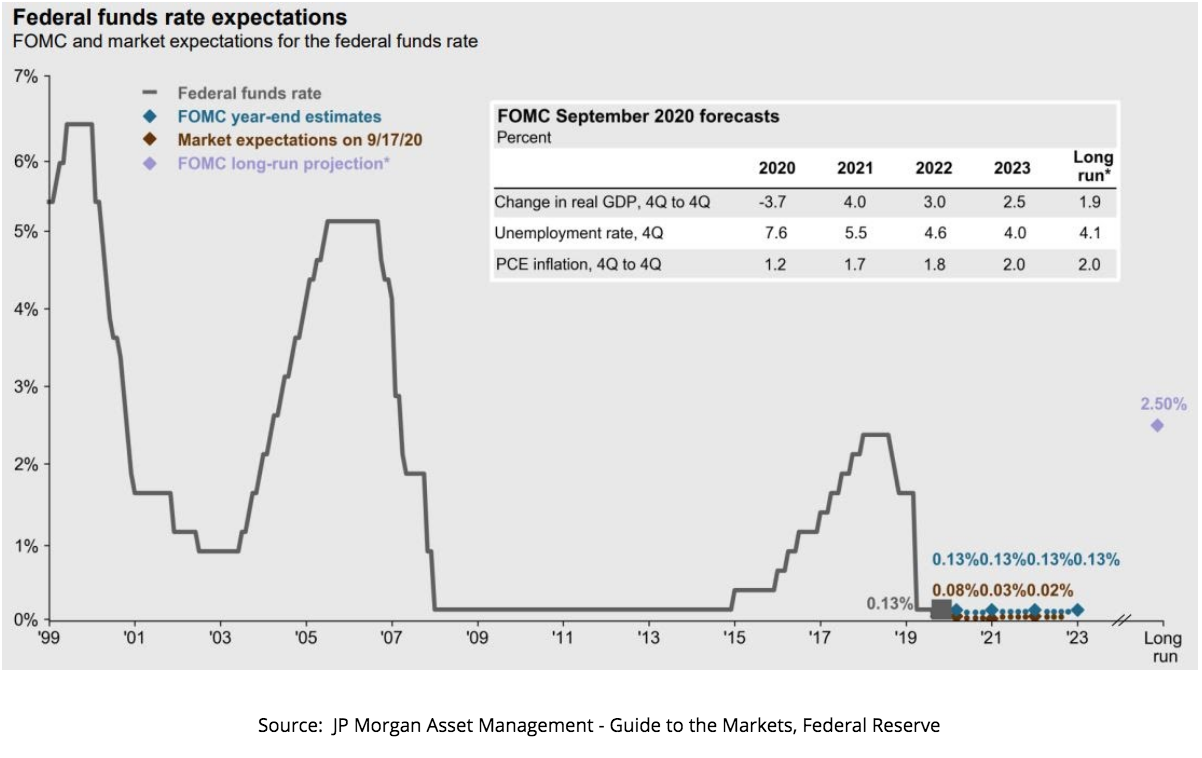 Over the course of 2020, the Fed has implemented  unprecedented monetary policy initiatives in order to combat the economic fallout from the COVID-19 pandemic.  This, coupled with Jerome Powell’s reassurance that the Fed will maintain interest rates at-or-near zero for the foreseeable future has had a significant, positive effect on our next topic – Economic Uncertainty & Trade.

With a potential Biden Presidency, we expect to see continued pressure on China as it relates to human rights violations, fair trade practices, and theft of intellectual property.  However, we will likely see a more conventional, multilateral approach than the tariffs implemented by the Trump administration.  These tariffs, often communicated unexpectedly via Twitter, resulted in sharp swings in volatility as uncertainty immediately flooded the markets as the trade war escalated with each subsequent announcement.

The expectation of a more conventional approach to China reduces uncertainty by allowing financial markets the time to digest and analyze potential disruptions to trade and supply chains.  This, we hope, will help to reduce short term market volatility related to tensions between the world’s two largest economies – China and The United States.

We finally come to the topic that is often of primary concern to many investors and business owners after an election – taxes.  What does a Biden presidency mean for the tax treatment of personal income, capital gains/dividends, estates, businesses and other investments? Well, we know that a divided government makes it harder for any administration – Democrat or Republican – to enact sweeping legislative changes of any kind, let alone changes to the tax code.  This partially explains the market’s positive reaction as the likelihood of divided government materialized last week.

Furthermore, in the midst of the deepest recession in U.S. history, it’s hard to imagine anyone – Congressman/Congresswoman, Senator, or President – having the political will to recommend increasing taxes of any kind in 2021.

However, regardless of which party is in power over the coming decade, the two charts below tell an alarming story.  According to the Congressional Budget Office (CBO), total government spending in 2020 will approach $6.6 trillion, with 50% of the budget ($3.3 trillion) being financed through borrowing as illustrated in Chart C below.  Clearly, the CARES Act stimulus affected these numbers in 2020, but budget deficits have been trending in the wrong direction since 2016. 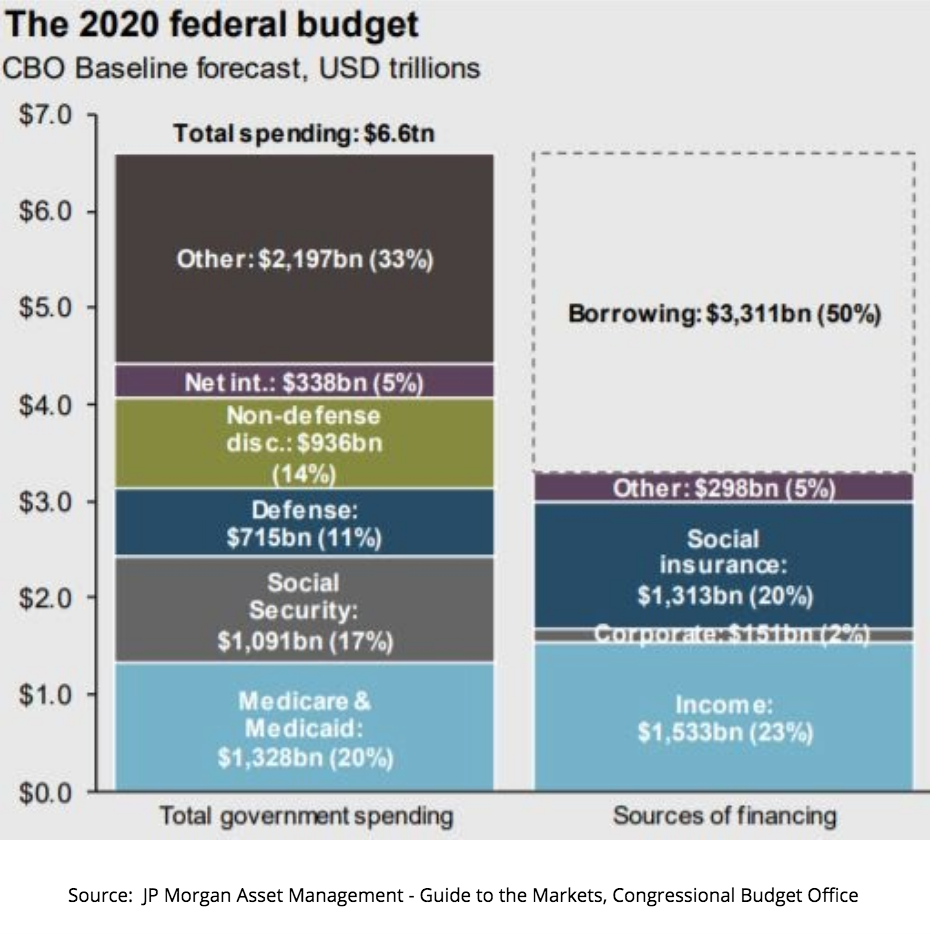 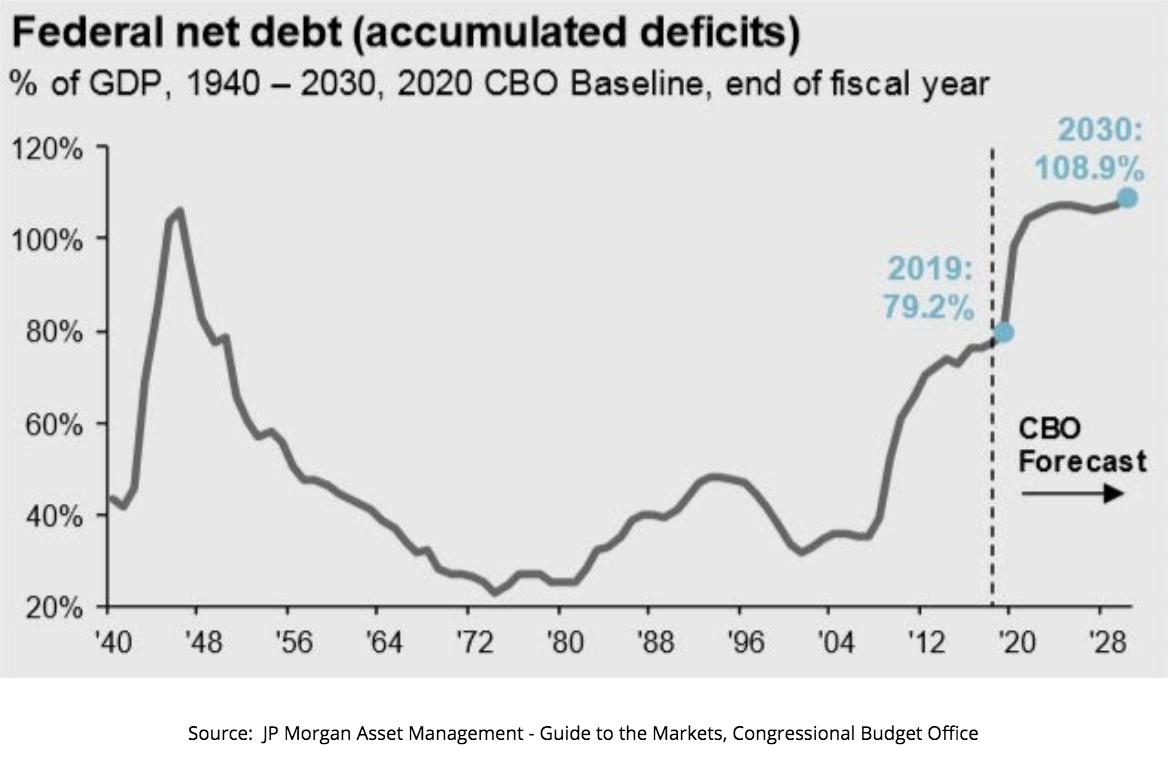 The sobering truth is that the government debt issue will need to be addressed at some point in the not-too-distant future, regardless of which party is in power. Whether or not change will be enacted through spending cuts or revenue (tax) increases – or both – remains to be seen.  Regardless, we believe it’s unlikely that any kind of tax increase will materialize in 2021, and this is due to the condition of the global economy and the likely outcome of divided government with the Republicans keeping the Senate majority.

It goes without saying that this situation is fluid, and the election outcome is not carved in stone. We do, however, think it is important to communicate how we view the economy and financial markets as things stand now.  Of course, if the election outcome changes in the coming weeks, we will communicate how that impacts our underlying assumptions and alters our outlook on the economy and financial markets.