I must admit – after two long months in relative isolation, I’m starting to develop a new obsessive behavior.  Is this obsessive behavior constant exercise and consistent dieting?  Of course not.  Is it binge watching Tiger King and dying my hair platinum blonde?  No – Joe Exotic was so April of 2020. Is it drinking an extra glass of wine in the evening? n Well, yes, but that’s beside the point.

The new obsession I’ve developed in early 2020 is with the popular online learning service – MasterClass. As an individual who lists ‘curiosity’ as a defining trait, this service has been a quarantine gold mine.  Over the past several months, I’ve learned the culinary arts from some of the best chefs in the world, gardening from ‘gangster gardener’ Ron Finley, storytelling from one of my favorite writers – Neil Gaiman, just to name a few.  So far, this new obsession has – generally speaking – been a positive one, although if I end up taking Bobbi Brown’s makeup & beauty class, my wife might start to get a little concerned.

Nevertheless, earlier this week, I began the chess strategy MasterClass taught by Russian GrandMaster and former Chess World Champion, Garry Kasparov.  I assure you, my interest in this class is much less impressive than it may seem at first glance, as my current chess expertise rises to the level of – the horsey moves in an L-shape.  Still, if you’ve read any of my previous communications, you’ll know that – in my mind – everything relates back to investing.

In one of his initial classes, Kasparov shares the old chess adage, “Tactics means knowing what to do when there’s something to do.  Strategy is knowing what to do when there’s nothing to do.”  This lesson resonated with me when thinking about tactics and strategy as it relates to investing.  Kasparov goes on to talk about tactics as in-game adjustments and knowing when – and how – to capitalize on an opportunity.  When thinking about strategy, he encourages chess players to be true to who they are, and not allow the opponent to dictate decision-making.  Play to your strengths.

I joke that investing and portfolio construction can be a lot like building a bridge during an earthquake.  Foundations can shift, measurements may need to be recalibrated, and assumptions may need to be adjusted.  How, then, do you make tactical adjustments or strategic changes in an ever-evolving landscape?

Destiny Capital has spent an extraordinary amount of time defining and outlining key core values that represent who we are and what we strive to be as a firm.  Whenever a difficult decision is being deliberated, our team reflects on these core values for guidance and insight.  When it comes to investment decisions, our Investment Committee and Advisors reflect on similar values and characteristics that define who we are as investors.  These values and characteristics are our guiding star, so to speak.  Therefore, when considering a tactical decision, we ask fundamental questions like – does this reflect discipline and diligence?  Is this in the best interests of our clients?  Is this decision data-driven or is it subjective?  Is this an innovative solution?  Does this tactical adjustment align with the overall long-term strategy?

In short, we actively identify and implement tactical opportunities to better position client portfolios, yet – as Chess GrandMaster Garry Kasparov recommends –  we remain true to who we are as investors and asset managers.  This allows us to maintain incredibly strong conviction in our thesis, process, asset selections, and tactical decisions.

As for the ever-changing market landscape, we’d like to briefly provide some updated COVID-19 numbers, an earnings season recap along with some data that is emerging from one of the most important drivers of the American economy – consumers.

Tracking and analyzing COVID-19 test and case data will be important in the coming days and weeks, as stay-at-home orders are relaxed in many states.  This will give us our first glimpse into how quickly the virus may spread under less stringent stay-at-home and social distancing conditions.  As seen in the chart below from Johns Hopkins, it appears as though daily confirmed case growth has leveled off.  We’ll continue to closely monitor charts like this in the coming days, as financial markets may react to dramatic changes in the growth trajectory of COVID-19.

Earnings Update: As of May 1st, 55% of the S&P 500 reported Q1 earnings with a blended earnings decline of -13.7%.  Similar to the week beginning April 21st, sectors like Consumer Staples, Information Technology, and Healthcare continue to lead the way with positive earnings surprises, while Real Estate, Financials, and Consumer Discretionary continue to struggle.

While we are currently focused on Q1 results, we continue to have an eye on the future.  We are starting to see some revised Q2 2020 earnings estimates, and the data is not pretty – to put it lightly.  As a whole, according to FactSet, the S&P 500 is expected to see an EPS decline of -28.4% in the 2nd quarter, with Energy, Consumer Discretionary, Industrials and Financials seeing even deeper EPS cuts.

Consumers: Data is also emerging that captures the outlook of one of the most important and influential pieces of the American economy – the consumer.  In fact, as soon as the pandemic was announced months ago, I began an Investment Committee meeting with one simple question – what happens in a consumer economy when people stop consuming?  This continues to be a key question and, as seen in the chart below, we saw a significant drop in consumer confidence as reported on April 28th.  We also saw a 90 point drop in the Present Situation Index – the largest drop on record.  That is to be expected given that we’ve seen unprecedented unemployment in recent weeks, with another 3.169 million initial jobless claims reported on May 7th. What does this mean for investors?:  As reported earlier, on May 7th, it was announced that another 3.169 million Americans had filed initial jobless claims.  There are now over 33 million unemployed Americans who once had jobs as recently as 7 or 8 weeks ago and, as a result, consumer confidence has fallen off a cliff.  Yet, after the initial jobless claims report was released on May 7th, financial markets proceeded to move higher.

How can the markets continue to shrug-off such dismal numbers?  Well, we’ve covered several reasons for this in prior communications, particularly as it relates to the industries immediately affected by the pandemic and their relation to GDP and S&P 500 operating earnings.  However, this week we’ll focus a bit on the demographics of who is unemployed and the effect this may or may not have on financial markets.

To be clear – unemployment can affect anyone at any time, regardless of experience, age, or education level.  This commentary is also not meant to pass judgement, as some of the most successful people I’ve met both personally and professionally have a high school education or little-to-no college experience.  However, we are trying to make sense of the question – how can 33 million Americans lose their jobs while financial markets continue to maintain current levels? 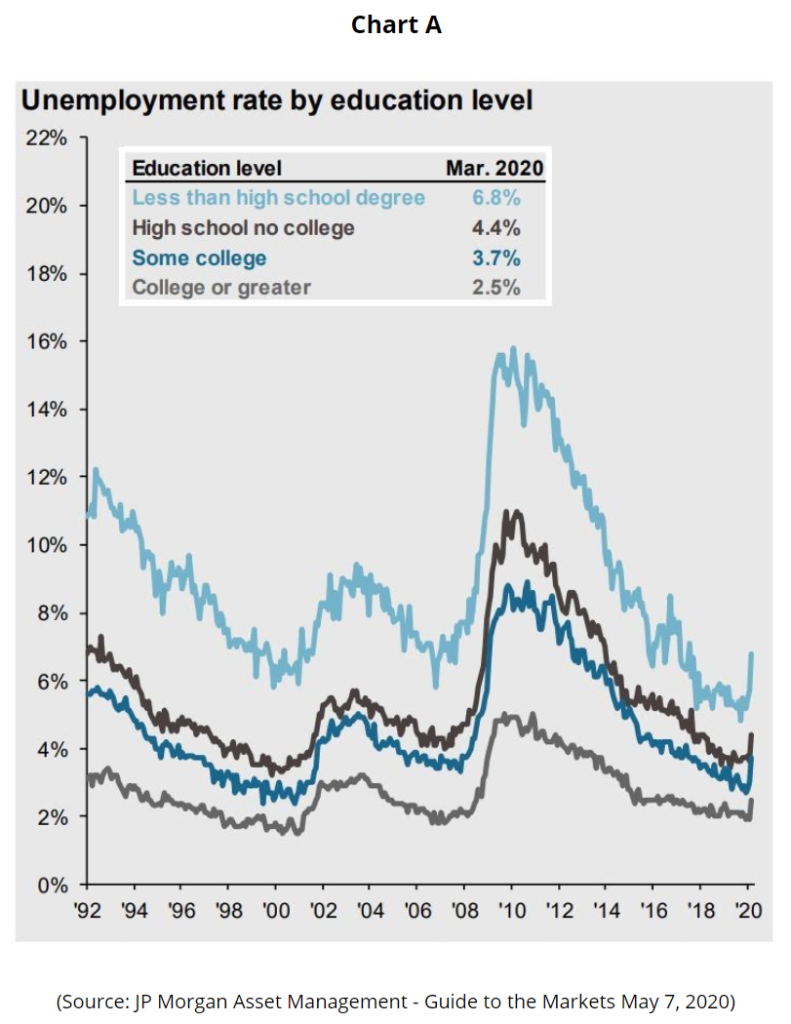 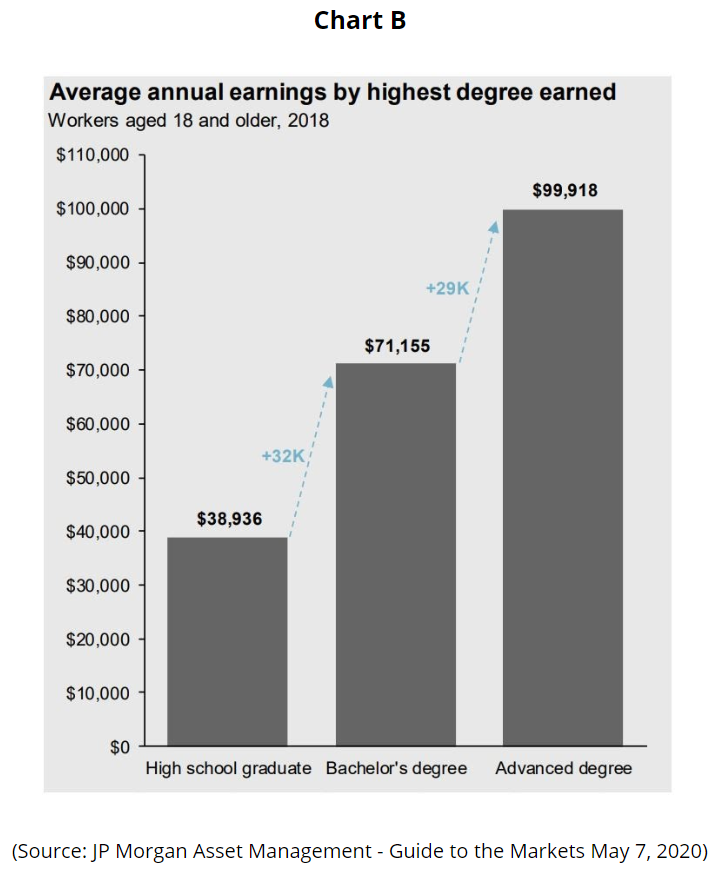 Therefore, investors may be feeling that with unemployment – generally speaking – confined more to low wage earners, the effect on the overall economy will be less severe than if these job losses were felt in the information technology and/or financial sectors, for example.  There is also the expectation that there will eventually be an end game with this pandemic.  Once a vaccine is available or treatments become more effective, some assume that many of these workers will be welcomed back as job openings surge.  These assumptions may fail to consider that we may see fundamental, long-term changes to how many of these affected industries operate.  As such, we may see the unemployment numbers for lower-wage workers remain elevated for longer than we might hope.

I’ll use the restaurant industry as a brief example.  As I’ve noted in previous communications, I follow the restaurant/dining scene rather closely, particularly along the Front Range of Colorado.  I was recently drawn to an interview with local restaurateur, Frank Bonanno – chef and founder of Bonanno Concepts which owns/manages well-regarded restaurants like Mizuna, Luca, Denver Milk Market, among others.  In the interview, Frank discussed how the restaurant industry may change as a result of the COVID-19 pandemic, and his discussion included topics like decreased capacity, reduced hours, shorter dinner service, smaller kitchens with fewer chefs, takeout & delivery focus, among other things.  After reading and digesting these comments, I realized that we may truly be entering a brave new world post COVID-19 – particularly in the most affected industries – and many uncertainties still remain.

Regardless, we still remain very optimistic about the American economy long-term.  At Destiny Capital, we aren’t intimidated by change.  As a firm with a core value of ‘Adaptive’, we see change and disruption as an opportunity for innovation and I, for one, am excited to see the innovations that emerge as a result of the pandemic crisis.