Coronavirus Update: A Focus on Oil 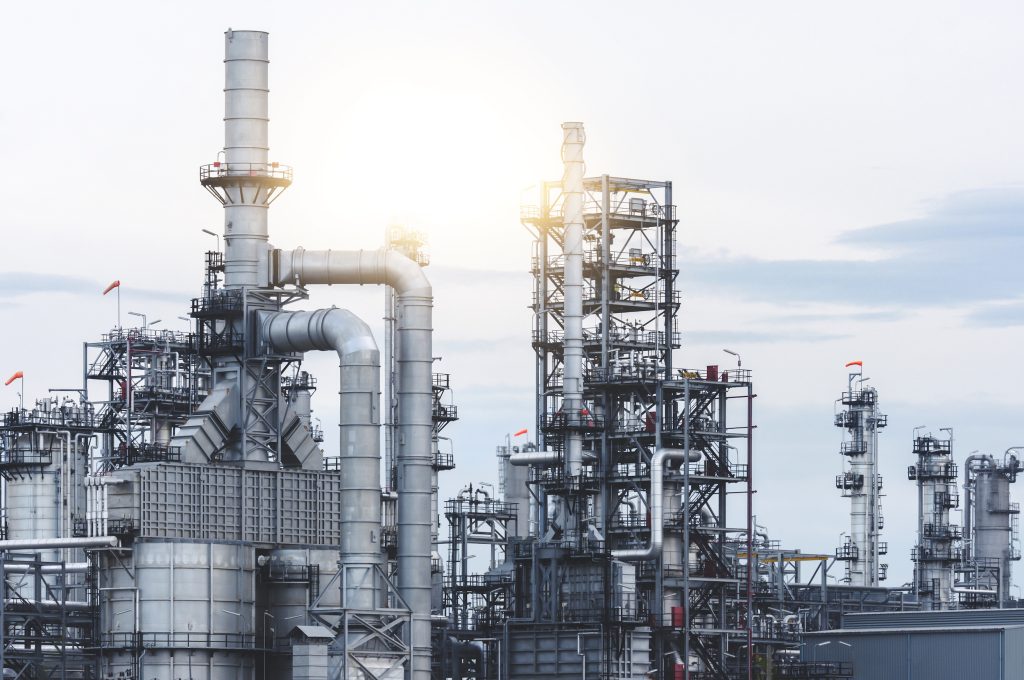 An aging king.
Challengers for a throne.
Loyalty, betrayal, nighttime raids and arrests of political rivals.
A polarizing, volatile young prince eager to seize power and make his mark.
No, this isn’t the plot of a Shakespearean tragedy or George R.R. Martin novel – this is Saudi Arabia.

One topic that has gotten lost in the shuffle of the COVID-19 crisis is what’s been happening with the world’s largest commodity – oil.  Since early March, crude oil prices have plummeted and, this week, U.S. crude oil futures contracts for May delivery dipped sharply into negative territory. In fact, several days ago, I jokingly communicated to the Destiny Capital staff that barrels of oil have officially become like used hot tubs on Craigslist.  If you’re willing to pick up a hot tub and store it, some people are so desperate to get rid of it that they’ll often let you have it for free.  We are seeing similar short term activity in oil markets.  Clearly, this is no joking matter and, under normal circumstances, this type of severe volatility in oil prices would consume daily headlines.  However, as we all know, current circumstances are far from normal.  Still, we thought this topic was important and worthy of singular focus in this week’s update. 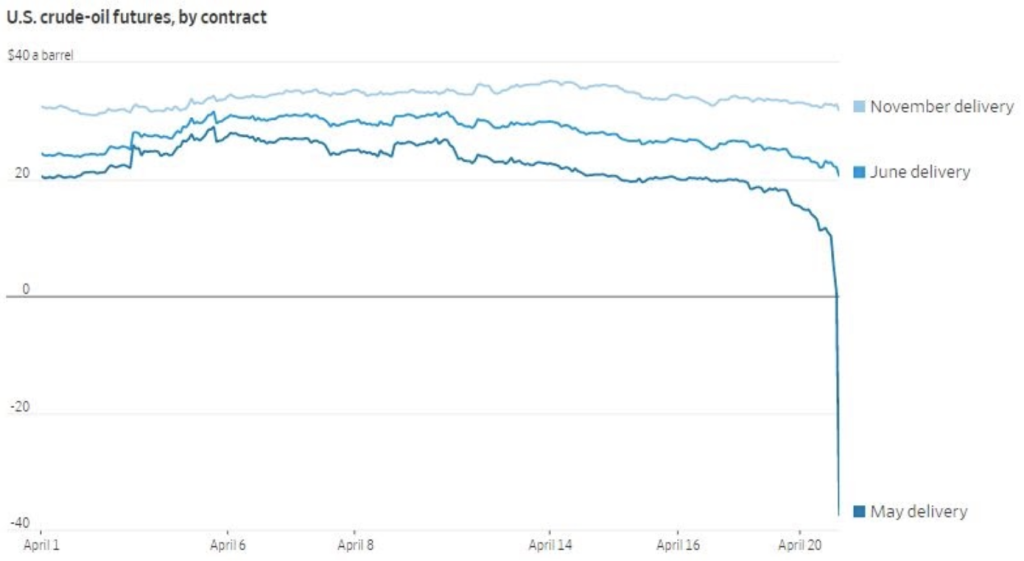 A Story of Succession & Power – In recent years, the story of succession in Saudi Arabia can be considered both fascinating and disturbing, particularly if you are a history and politics wonk like I am.  In 2017, Saudi Arabia’s King Salman named his young 31-year-old son, Mohammed bin Salman (commonly referred to as MBS), as crown prince and successor to the Saudi throne, removing his nephew, Mohammed bin Nayef, as heir.

To this day, this arrangement is hardly considered a done deal, particularly in the eyes of the rivals of MBS.  In fact, it was reported around March 8th-9th of 2020 that MBS had Saudi forces raid the homes of several rivals and detain them in an effort to deter any challenges to his power or attempts at a coup.  The intrigue of Saudi politics is far too detailed to get into here, and I would encourage you to read articles, books, and listen to podcasts/interviews related to the subject.  As I said, it is fascinating, frightening, and reads like the plot of a Shakespearean tragedy. Still, you may be asking – what does Saudi royal succession and politics have to do with all of this?  The answer is simple – oil.

Saudi Arabia and Russia are two of the top three oil producers in the world, at 12% and 11% of total worldwide production, respectively.  For roughly 3 years, Saudi Arabia and Russia had maintained an agreement to reduce and cap oil production in an effort to keep prices elevated.  Clearly, this benefited each country, as annual revenues and national budgets are largely dependent on oil production and export.  In fact, MBS wanted the Russians to extend this decreased production arrangement well-into 2020, insisting that Russia further cut oil production by 1.5 million barrels per day.  This is a sizable cut given that Russia produced 11.4 million barrels per day in 2019, according to the US Energy Information Administration.

Russia was hesitant to extend this agreement and wanted the freedom to operate more independently.  As you are likely aware, Russia is led by a man, Vladimir Putin, who does not respond well to external political pressure or coercion.  This situation finally came to a head at the Organization of the Petroleum Exporting Countries (OPEC) meeting in early March of 2020.  Led by top producer, Saudi Arabia, OPEC ministers continued to pressure Moscow into steep production cuts, as the global economic slowdown due to COVID-19 threatened to decimate oil demand and, subsequently, lead to lower prices.

Russia is not a member of OPEC and was present to conduct informal meetings.  During these meetings, Moscow continued to resist additional production cuts.  Therefore, during negotiations, MBS responded by having his representatives not only insist on the 1.5 million bpd cuts, but also demand that the cuts last even longer than originally requested.   Russia continued to balk, so MBS and Saudi Arabia walked.

Not only did Saudi Arabia walk away from further negotiations, but they vowed to increase production and lower prices, steeply undercutting Russia in what many oil analysts considered to be the ultimate power play – and ultimate gamble.  As a result, the Saudi Arabia / Russia oil war began on March 8th, 2020 – right around the time that MBS rounded up and arrested political rivals in multiple nighttime raids.  On Monday, March 9th, oil prices plummeted, financial markets sold-off sharply, and oil markets have been in turmoil since.

You might be asking yourself – what was MBS thinking?  To this day, many economists and analysts are still asking themselves that very same question.  According to the IMF, Saudi Arabia would require a price of roughly $76 per barrel in order to reach its fiscal breakeven in 2020.  On the other hand, Russia’s fiscal breakeven price is around $42/barrel.

Both Saudi Arabia and Russia keenly felt the pinch and, on April 13th, it was announced that OPEC members, along with Russia and Mexico, would cut production by 9.7 million barrels per day in May and June.  After that, production will be steadily increased until the expiration of this agreement in April of 2022.

However, what we have now is a glut of oil across the globe, and no current means to consume it. Nationwide, crude storage capacity is now at 60%, up from 50% over a month ago.  Futures contracts for June and July continue to hover between $15-$25, as investors hope that demand will increase as certain areas of the global economy begin to emerge from COVID-19 hibernation.

What does this mean for investors? Historically, commodities – generally speaking – have been considered an essential part of a well-diversified portfolio.  At Destiny Capital, we have always limited our exposure to commodities and the energy sector, in general.  Our research shows that commodities and the energy sector simply don’t have a risk/return profile that warrant significant inclusion in a long-term investment portfolio.  In very basic terms, this can be illustrated in the quilt-chart below where – as a sector within the S&P 500 – energy (green tiles) has been a performance laggard, particularly in 7 of the last 8 years. 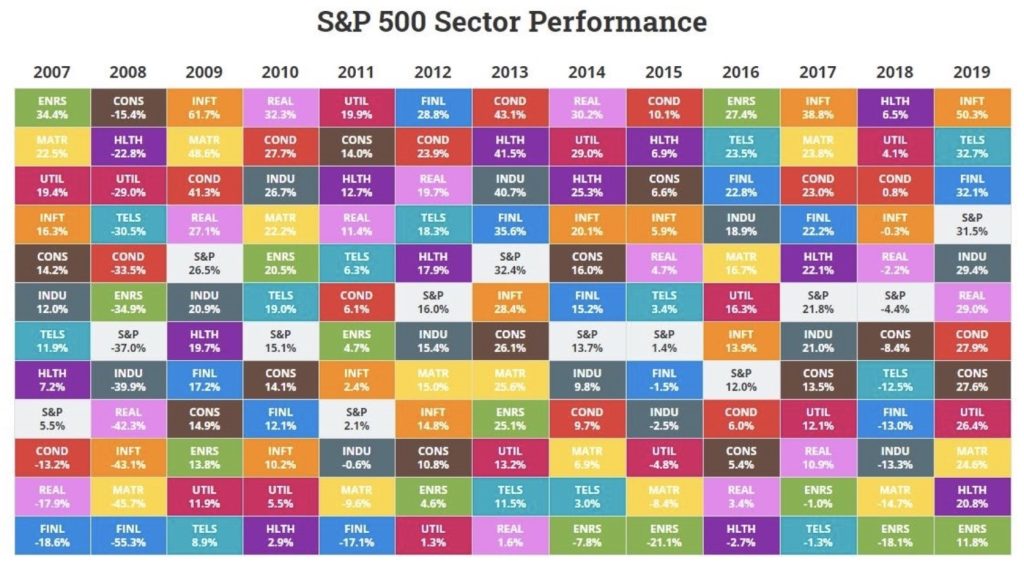 When discussing the Saudi / Russia oil price war and subsequent oil market volatility, we also can’t neglect the fact that depressed oil prices affect the world’s largest oil producer – the United States.  Many analysts and economists believe that this price war was also meant to decimate the U.S. shale oil industry, which carries a breakeven price of $40-$50 per barrel.  In early April, the shale oil industry saw its first bankruptcy, as Whiting Petroleum (WLL) filed for Chapter 11 protection.  Analysts expect many more shale oil companies to follow suit unless prices rebound significantly or unless some kind of fiscal aid is proffered.  Furthermore, energy consultants Rystad Energy estimate that up to 240,000 oil-related jobs in the United States will be lost throughout 2020. 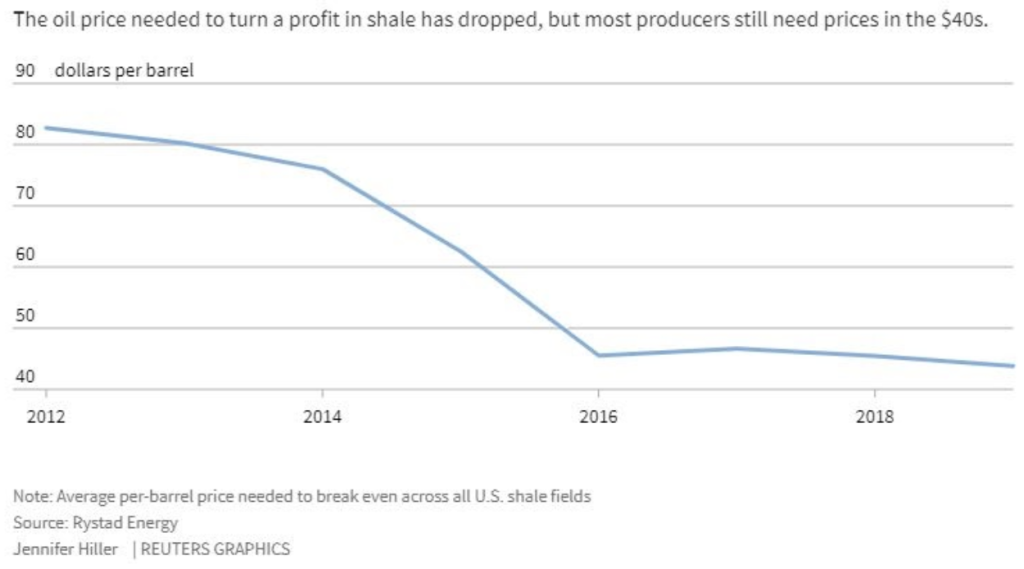 Under normal circumstances, 240k of jobs lost would raise considerable concern.  Yet, that is less than one tenth of one percent of the total jobs that have been lost in the United States over the past 5 weeks.

As with other industries immediately affected by the COVID-19 pandemic, the only resolution to the collapse in oil prices will be a surge in demand as the global economy returns from suspended animation.  It is far too early to predict when that will occur, particularly in the United States.  Until then, we expect continued oil price volatility in the coming weeks, and additional bankruptcies are likely without some element of stimulus intervention.  Whether that is attainable either politically or fiscally remains to be seen.